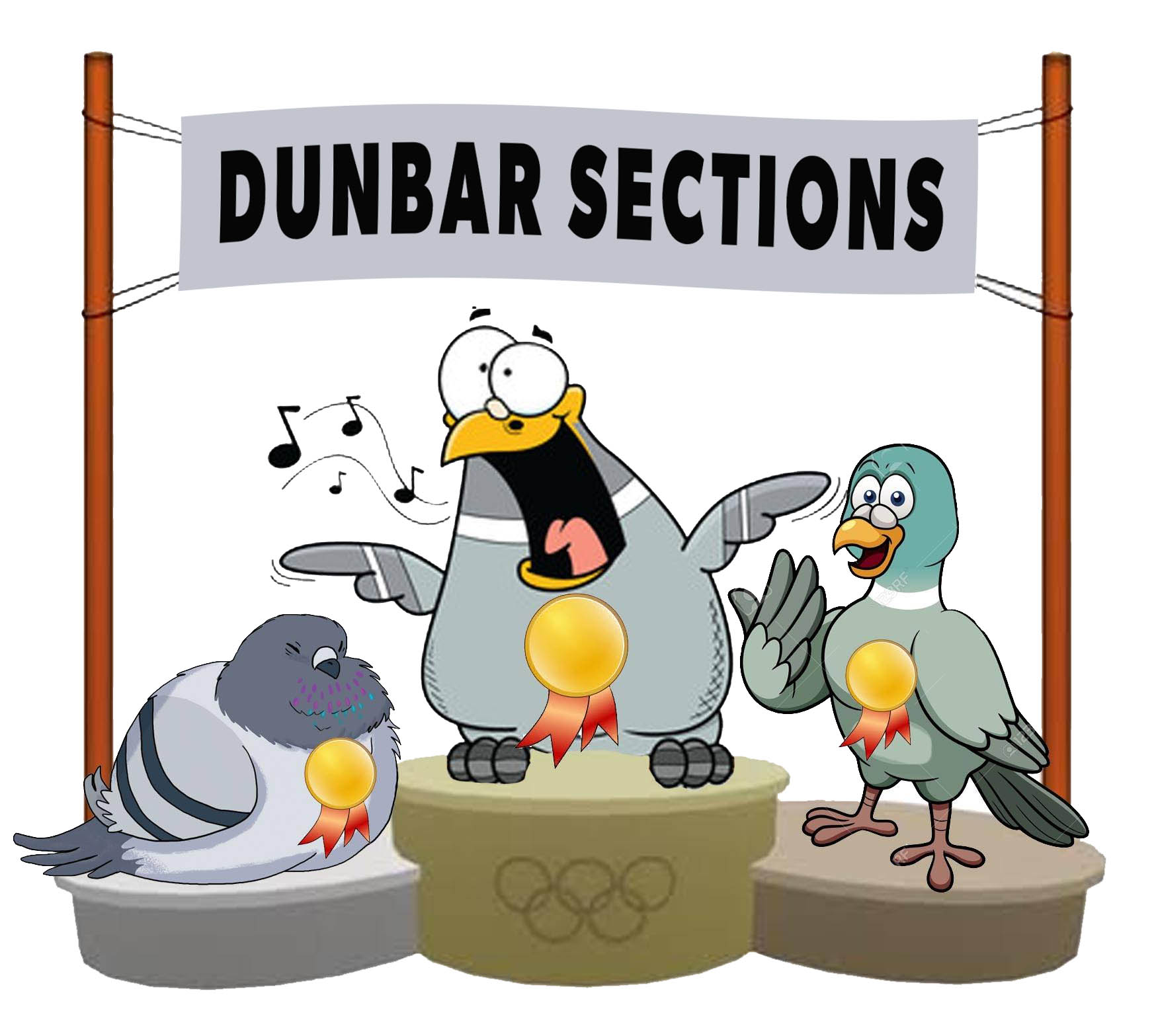 Away from all the drama of the near dead heat finish in the North Championship Club’s first race of the season from Dunbar, when Bob Boulton, of Addlethorpe, beat Dayton and Sayers, of Louth, by nine tenths of a second, there were other members fighting their own battles in the widespread sections.
And, as usual, there were excellent performances to catch the eye in areas where winning birds have to break away from the main batches and go it alone among the entry of 1908 birds sent by 168 members.
A particularly good one was by Roger Hallsworth in Section A as he was also placed 8th open in a race dominated by Section C members from East Lincolnshire.
With the north-west wind taking birds down the east coast, his open position was against the odds based, as he is, at Selston in Nottinghamshire.
Roger is one of the top fanciers in the NRCC, with consistent success at section and open level.
A retired miner, who loves his north road racing, Roger timed a two-year-old blue roundabout cock bird to clinch his section. This bird also won 2nd Section from Perth last year, and was some 20 minutes clear of the second bird to the loft, after which there was a steady flow from the 14-strong entry – although three are still missing.
Although he says he does not go in for sprint racing, Roger says his birds have “not been coming too badly this season” and have managed to be up with the leaders.
He has become a regular winner of both section and open prizes in the NRCC, and sends his pigeons every week unless there is some overriding reason to give them a rest.
He says he is not a meticulous with his timing of loft duties and exercise, but fits his hobby around other features of his life.
“When I was working in the mines I was on a three-shift system, and my pigeons had to be as well,” he pointed out.
There is no doubt, however, that pigeons thrive on the Hallsworth way.
Turning to Section C, the first thing to emphasise is that Liz Betts, of Spalding, is a gem, a diamond, a very special wife. Who says so? Husband Shane. Well, perhaps not in those exact words, but that is what he meant when he said of his section win: “I must thank my wife for all she does around the pigeons. Without her help I would not be able to race the birds.”
Mrs Betts does not just do the odd chore around the loft, she does the whole lot for five days of the week, exercising and feeding, and also baskets the birds for NRCC races, and then even tolerates 60-year-old Shane spending the whole weekend in and around the loft. And she is not a pigeon fancier!!

All this is because Shane works away from home, currently in the Bristol area, all week. He says “Hello” on Friday evening, and “Goodbye” on Sunday evening.
So to gain his second NRCC section win (the first was in a hard Fraserburgh race two years ago) must mean that Liz carries out his instructions to perfection. And don’t forget that she also has a full-time job.
Shane leaves all the food in tubs, with the day written on them for when it should be given to the birds, and Mrs Betts lets the birds out for exercise in the morning before she goes to work, and in the evening when she returns.
Pre-season Shane gives his widowhood cocks just three tosses, and then they race every week.
“I race only the cocks to keep it simple,” he says.
When NRCC races come along, he is grateful to clubmate Martin Lewis for taking his birds to marking. “I must thank Martin very much for his help,” he says.
Shane has made a pleasing start to the season, being among the leaders most weeks, and his Section B winner from Dunbar was a blue chequer yearling cock bird which had also won as a baby.
The breeding is of Ceuleman and Danny Van Dyke lines, the latter being obtained from his Bristol friends Messrs Bryant and Bateman. 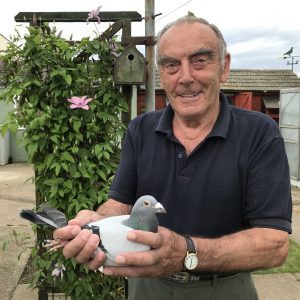 Section C was, of course, topped by the race winner, Bob Boulton, of Addlethorpe, Skegness, details of which have already been published.
Camera-shy Richard Waller, of Peterborough, feels that his prowess as a pigeon fancier does not warrant a lot of publicity, but he is doing all right in both north and south clubs this season as was emphasised by his win in Section E from Dunbar.
“I do it all a bit willy-nilly,” he said. “I am often away for work and my daughter lets them out.”
His section winner was a little hen bird he bred himself –“Heinz 57” he says – and was flying on roundabout.
The 57-year-old groundworker, has been in the sport since 2007, and says that this is his best season so far, although he had a good bird in the section in last year’s young bird national.
He keeps a team of about 60 old birds.
Section F was another section won against the odds considering that the winners, EW and HE Attlesey, are based at Ely and the majority of this section’s flyers are situated to the east, notably the Norwich area.
But Will and Hilary Attlesey are competitors with a top reputation and a number of excellent performances on their CV. “Would have been more had it not been for Ivan Rich,” quipped Will. Ivan, of course, is a fellow Ely club member and a great supporter of the NRCC, having won the King’s Cup from Lerwick and also the second longest race from Thurso.
In fact the Attleseys were runners-up to him when he won the Thurso race in 2010.
Significantly their Section C winner from Dunbar, which emphasised the quality of the performance by finishing 12th open, was bred off those two Thurso birds – Ivan’s winner and their runner-up.
The latest winner was a yearling blue chequer white flighted cock bird, sent sitting ten days. This is the first time in 30 years that the partnership has not flown widowhood.
Will says that he decided to turn to the natural system to test the quality of the hens. So far the cocks are responding well to the change, but the hens have not set the world alight.
They sent a team of 16 to Dunbar and all were home on the day, but there was a 20-minute gap between first and second timings.
Now 72, Will has flown pigeons since 1976. Wife Hilary is secretary of the strong Ely club which competes in the Peterborough and District Federation.
Will’s sporting interests also include playing golf and bowls.
In a past spell of south road racing, the partners had a Midlands National win to their credit, but now concentrate solely on the north road.

Connoiseurs of NRCC racing always search for the results of London fanciers, and rarely do they fail to find an outstanding performance. This time there was one by the partnership of George Chalkley and son Steven who won Section H and, in the process, finished in a highly commendable open position. This bird had had just a couple of races prior to being sent to Dunbar, as the Chalkleys send hens one week and cocks another, and had a few races as a young bird. George and Steven are great supporters of the NRCC and have had several excellent results. Hopefully this latest win will be a boost to Steven in his recovery from illness which has required a stay in hospital.

The quality of birds in their loft was highlighted last year by a pigeon, bred by Robbie Wilton, which won Section H from Thurso with the NRCC only a week after winning the London North Road Combine from the same racepoint, a distance of 500 miles to their loft. Both races were tough and down to 700 yards per minute.
This five-year-old cock bird has now flown Thurso four times and, all being well, is destined to go again this year.

Manningtree in Essex, with a population of less than 1,000 is said to be the smallest town in England, but it is home to a pigeon fancier quickly earning the reputation as one of the best distance fanciers in the NRCC.
Ronald Reason enhanced this reputation still further by taking first and second places in Section I from Dunbar, with velocities of 1344 and 1337, earning open positions of 124 and 144, over 316 miles.
The section-winning bird is a blue white flight hen on her sixth race of the season, having flown with the Saxon Valley and two Essex and Kent amalgamation races from Wetherby and Ripon.
She was third section NRCC Perth last year.
Results last year for the NRCC season were: 1st section Dunbar; 1st section Perth. 3rd section Perth; 4th section Thurso; and 5th section Berwick young birds.
Ronald reports: “I have had 3x1st in my local club this year, so birds have been flying well this season. I am racing 11 cock birds and 12 hens, flying a sort of roundabout when the hens get to see the cock birds on return from the race. They are fed on Verselage food with added grains depending on what the race is.
“The breeding is a mixture of all my old strains. She will be going back to Perth. I was also 2nd section as well. Not bad, considering I sent only 6 birds.”

Footnote: NRCC legend, Peter Crawford, of Ipswich, celebrated his 89th birthday last week and, I am told, is itching to get back to the pigeons after a spell in hospital. I am sure all members will wish him well. A NRCC result which does not feature his name in a prominent position seems incomplete.