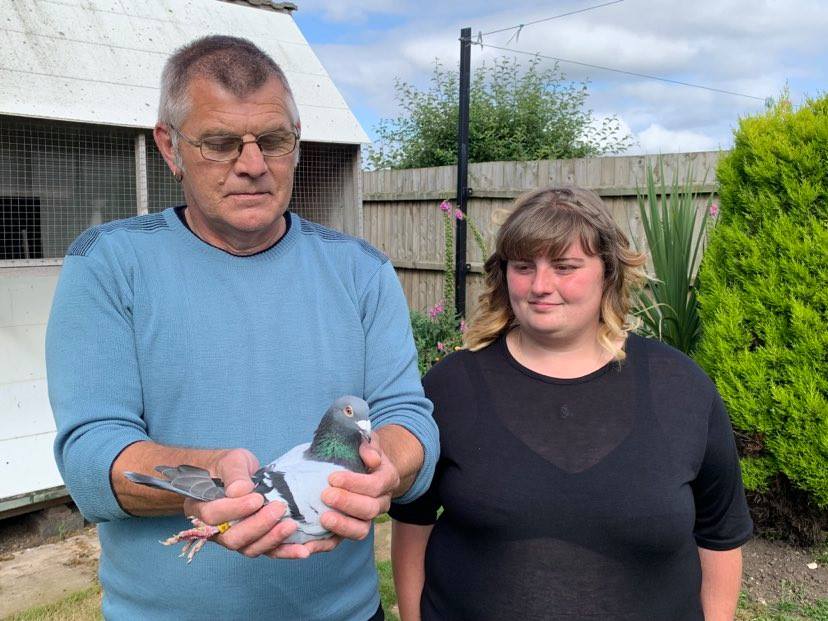 The finale with the North Road Championships old bird series finally came under staters orders on Tuesday 13th July when after a three day holdover conveyor Darren Shepherd had the 920 pigeons away at 7:30 am into a north east wind and as Ian said ‘It was one of those races when you didn’t know whether the winning birds would do 60mph, 50mph or whatever, so I was at the computer (Ian) checking our verification service from 14.00 onwards!’

First to verify was Ernie Gregory of Eastwood timing in at 16.04, his bird doing around 46mph this was closely followed by the race winner A&J Pinner & Jazmin of Wainfleet timing at 16.07 with their two year old blue cock bird on a velocity of 1385ypm.

Knowing Andy for some time it was nice to see him at the top of the pile but as he said when I spoke to him on the day ‘it’s a nervous wait now and could be a long one but although some positions were changing on the leader board Andy was hanging in their and as the clock was ticking away Andys cogs were doing over time as he kept sneaking back to the computer to take another look and work out what time different section winners had to be in to knock him from his perch, ‘I’m a nervous wreck’ said Andy.

I was soon able to contact Andy and arrange a time to go and verify the provisional and now confirmed winner of the 2021 North Road Championship Club ‘1st open Thurso Winner’.

I would imagine if you had ever visited the late great Frank Tasker of Wainfleet be it on his stand at Blackpool or Doncaster then you too would have met Andy as since Franks move to Wainfleet back in 1988 a young Andy then 26 struck up a friendship with Frank and was soon became his helper around the stock lofts and at the shows.

So fitting that the winner contains some of his late friends bloodline. Though bred by club mate George Crust who had had some of Frank’s Marcel Aelbrecht bloodline via Andy and couple to George acquisitions from Premier Stud when coupled together bred the winner for Andy!

The winner is medium sized two year old blue cock bird flown on the classic widowhood system, the birds were paired at the beginning of February allowed to sit for twelve days and then split. He was repaired ten days here the first race with the Peterborough and District Fed which was in fact two weeks later than the federation’s usual start due to the Avian Influenza restrictions imposed on all racing in the UK.

During this time of the second pairing the birds are given a few tosses up to Louth and then into his the first race which was Driffield 68 miles through to Whitley Bay 151 miles after which he was basketed for Perth with the NRCC finishing 13th Open a race that also proved as difficult race as Thurso.

Prior to the race some times the hens are shown and other times it’s just the bowl, but for NRCC races Andy lets the cocks have the hens after their last evening meal so as when he baskets them the following morning they are not so excitable in the basket

Not only did this blue cock finish 13th Open, he also competed in the NRCC race from Fraserburgh where he finished 27th Open, Lerwick he sat out, however Andy did finish 4th Open in the Kings Cup Lerwick race with one of his two entries. Knocking on the door how he had been at the previous NRCC races as it is fair to say Andy was basketing his birds for the Thurso race with a touch confidence one might say and he had every right to be doing so as from his entry of six birds he clocked 4 on the day and one the following morning, needles to say his first clocked was the eventually 1st One Winner, which is now know as ‘LMP’ in honour of Andrews late wife Lorraine.

It was pleasing that all sections of the NRCC recorded birds on the day and congratulations to the race winners Andy & J Pinner & Jazmin and a special mention for Section I winner Derek Ratcliffe of Ipswich whose gallant bird covered 489 miles to record 18th provisional. Returns proved steady over the two days and returns on the whole were positive’.